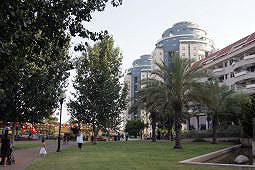 Hod Hasharon is a city in the center of Israel, located in the Sharon Valley, between Petah Tikva and Kfar Saba, east of Herzliya.

In the 1920s, four moshavs were established at the site where Hod Hasharon is now located: Magdiel, Ramatayim, Ramat Hadar and Kfar Hadar. Their inhabitants were repatriates from Poland and Lithuania.

In 1963 these settlements merged into one settlement. At the end of the 1980s, the number of its population increased sharply.

Due to its large area, the city retains a "village" style. There are not many multi-storey buildings here.

The city is actually a "sleeping area". The population of Hod Hasharon works mainly in neighboring cities.

On the outskirts of the city there is a small industrial zone.


City streets and attractions near the city:

City streets and attractions near the city:

Israeli Settlements in Judea and Samaria

Religious Cities and Villages of Israel

Distances between Cities and Villages

The Health Care System in Israel

Hospitals and Medical Centers in Israel

Cities and Villages of Israel

Traveling in the Holy Land

The Antiquities of the Land of Israel